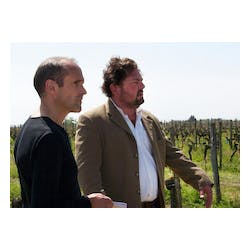 In the spring of 2018, we had a great visit at Chateau Mancèdre with Jean Trocard in Pessac-Leognan. He grew up on the right bank and is the 16th generation since 1628 in the Fronsac region. Although he was born and raised in the right bank, his mother is from Leognan on the left bank; her parents had continued to live there. When Trocard's grandmother passed away in 1992, he learned that her land is actually classified as Pessac-Leognan. The family used to make wine here, but all of the vines were killed in the frost of 1956 and never replanted. Trocard loves Cabernet Sauvignon, so it was an easy decision for him to replant the fallow land. His first harvest was 1998. He has 13 hectares, 11 in red, and less than two in white. The location of the vines is fantastic. One sector, just next to the winery borders Fieuzel. Another prized plot is just next to the Domaine De Chevalier. Over the years, Trocard has restored the land by uprooting the wild vegetation, pulling out tree roots and replanting vines. The terroir here is gravelly with clay underneath. Trocard is practicing organic viticulture, but does not have certification. He cannot become certified because certain organic products that he uses are not certified. He uses sulfur for oidium and an organic treatment, that he prefers to copper, for mildew. In 2001, Trocard completed his new cellar. It's simple, clean and modern. There is a cellar on one side and a vat room on the other and a beautiful tasting room with views of the vineyards. Vinification happens in stainless steel and the wines are aged in barrel for 12-15 months with 25% new oak depending on the vintage.

“This blend of 65% Cabernet Sauvignon, 35% Merlot is hand-harvested, then vinified and aged in oak barrels, one third new. Shows a sexy, vanilla-and-tobacco-inflected nose