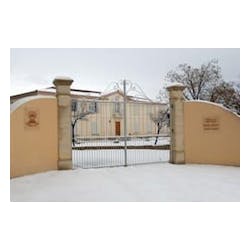 The origin of the name Vieux Lazaret dates back to the 18th century when there existed in the centre of the village of Châteauneuf-du-Pape a hospice or Lazaret. This offered comfort and shelter for the poor and infirm, provided by the Lazarists, who were a silent order of monks founded in 1625 by St Vincent de Paul to look after the sick and the needy in the French countryside. They took the name Lazarists from the Priory of St Lazare in Paris, where the original order had been formed in 1632. The Lazarists in Châteauneuf-du-Pape played a major role in taking in and looking after the sick during the terrible epidemic of the plague, which killed a third of the population in 1720. Subsequently the buildings fell into disuse and were sold by the Commune during the 19th century to the Quiot family and used as agricultural buildings. Being situated in the village of Châteauneuf-du-Pape and close to other properties owned by the Quiot family, these original buildings have today been extended and modernised, and now form the center of winemaking for Vignobles Famille Quiot. With this historical association going back over several centuries, the Quiot family decided in 1915 to give the name of Domaine du Vieux Lazaret to their principal Domaine. Today, Domaine du Vieux Lazaret is exported to more than 43 countries around the world. It can be found on the best tables and regularly wins medals in wine competitions throughout the world. Florence and Jean Baptiste are the 13th generation to work at the estate.Vineyards The vineyards of Domaine du Vieux Lazaret are spread over 93 hectares (230 acres), split into 35 different parcels of vines throughout A.O.C. Châteauneuf-du-Pape. It is today amongst the largest domaines in Châteauneuf-du-Pape, with 83 hectares (205 acres) planted in red grape varieties and 10 planted with white grapes. The number of parcels enables the Domaine to give greater complexity to its wines due to the diversity of soils, grape types and differing ages of vines.Viticulture The viticultural practices are strictly controlled and follow those traditions practised for many generations. The pruning is only done by those vineyard workers who are extremely experienced, and follow the strict rules of the appellation, with some vines trained on wires and others trained low to the ground. The soil in the vineyard is regularly worked to allow proper aeration, with regular application of compost, and other treatments to maintain the best organic level and condition of the soil. Harvesting of the grapes is done entirely by hand, with very strict selection of the best grapes to enhance the quality of the Domaine wine. The vines have an average age of 40 years.

Wine Spectator 93 “Ripe, sleek and captivating for its bright and forward display of cassis, cherry paste and boysenberry compote flavors. The finish is lined with

Wine Spectator 92 A high-pitched style, with red currant, Bing cherry and raspberry coulis notes racing through, turning darker on the back end, with hints

Wine Spectator 92 A high-pitched style, with red currant, Bing cherry and raspberry coulis notes racing through, turning darker on the back end, with hints of