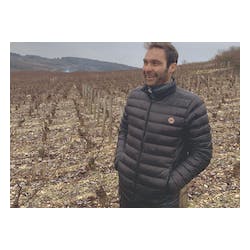 Joseph is the son of Marc Colin, and the younger brother of Pierre-Yves Colin In 1993, at the age of 19, Joseph began working full-time at Domaine Marc Colin For the next ten years Joseph worked alongside his father and older brother until Pierre-Yves left Marc Colin in 2003 to create his own Domaine – PYCM In 2004 Joseph and his younger siblings, Damian and Caroline, took over Marc ColinJoseph effectively started his own domaine in 2017 with approximately 6 ha of vines from the original Domaine Marc ColinFarming Practice:Sustainable

Wine Advocate 90 "The 2019 Saint-Aubin 1er Cru Les Champlots is the first harvest from young vines, and it has turned out nicely, exhibiting hints of

"Pierre Yves Colin was the winemaker for his father's Domaine Marc Colin until 2005. He began his own domaine, first as a micro-négociant operation,