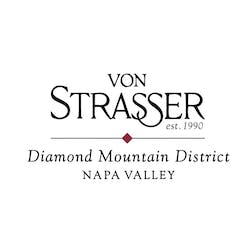 Founded in 1990 by Rudy and Rita von Strasser, this distinctive diamond-shaped label and eponymous brand has become synonymous with great Cabernet Sauvignon bottlings. From 1990 through 2016, von Strasser Winery was based in Napa Valley's Diamond Mountain District appellation, an AVA whose creation Rudy von Strasser spearheaded. Over this time, the brand exclusively bottled wines from within this AVA gem, and was named Winery of the Year by Wines and Spirits Magazine an unprecedented 13 times. Currently Von Strasser produces 7 different Cabernet Sauvignon-based wines in 3 tiers. The introductory tier is simply called DMD, and is a complex, long-lived and elegant wine. Next is the vineyard-designated tier with bottlings coming from Sori Bricco Vineyard, Post Vineyard, Diamond Terrace Vineyard, Agira Vineyard, and Vineyard 2131. The top tier is a Bordeaux-blend simply called 'Reserve' which has won numerous accolades and near perfect scores since it debut in 1995.