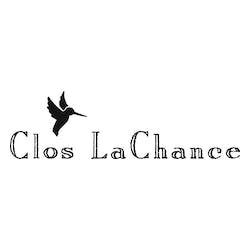 In 1987, co-owners Bill and Brenda Murphy decided to plant a few rows of Chardonnay in their Saratoga backyard, both for landscaping purposes and to realize their dreams of being small-scale vitners. A few years later, the wines produced from this small backyard vineyard were good enough to sell to the public. It was at this point that Clos La Chance formed into a commercial winery. The first released wines were from the 1992 vintage. The next 15 years would take the Murphy's from 200 cases of wine produced to 80,000; 3/4 of an acre to 150 acres planted and 20 full-time and 25 seasonal employees. Clos LaChance takes its name from the small fenced-in area encompassing a vineyard (Clos) and from co-owner Brenda Murphy's maiden name (LaChance). The Murphys chose the Hummingbird as the winery's symbol for both aesthetic beauty and its ability to keep other birds away from the grapes. Together with their daughters, Bill and Brenda have created a multi-generational, family-owned and operated winery. It is their dream that the third generation will eventually take over their business. The winery is located in San Martin, California, within the Central Coast American Viticltural Area. Tucked into the beautiful Hayes Valley, Clos LaChance is a true wine country experience located only 30 minutes from the Silicon Valley Being a good steward of land and resources are key components in Clos LaChance's winemaking practice. The family is especially vested in the sustainability of the winery and the vineyard with the hopes of creating a legacy for their children and grandchildren.

“The Cabernet Sauvignon off of the Clos La,Chance Estate sits higher in elevation than any other varietal and is high on the hillside. The soils

Wine Enthusiast 89 “This kitchen-sink blend starts with aromas of strawberry sorbet and dark mint on the fresh and spicy nose. The palate is very ripe

Cabernet Sauvignon is the king of red wines and at Clos LaChance there is no exception. Cabernet is the largest volume of acreage for a

22 Pirates was created to employ the finest Rhone Varietals from premier wine growing regions throughout California. The wine is a distinct representation of the

"22 Pirates was created to utilize some of the best grapes and wines scatterered throughout the best wine growing regions in all of California. California