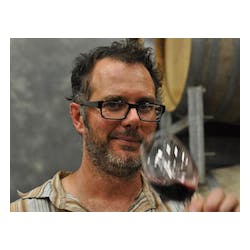 Ancient writings tell an endearing tale of Jamsheed, a Persian king who was said to be able to see his kingdom in a cup of wine, and whose fondness for fresh grapes lead him to store them in jars over winter where they would inevitably spontaneously ferment and be set aside as 'poison'. One of King Jamsheed's harem, despairing of frequent migraines, chooses to commit suicide by drinking from a poisoned jar. She wakes to find herself miraculously cured, informs her king who is most pleased and sets about making many jars of 'poison' and thus wine was discovered. Gary Mills is the visionary, brains and hands behind Jamsheed. Originally born in Western Australia, Gary completed a Bachelor of Literature, before moving to Japan to study and work as an English teacher. Upon returning to Australia he had an epiphany during a brief stint as a Japanese speaking tour guide in Queensland, and began work in the vineyards of Margaret River. His passion took him to the States for what started as a five week harvest intern at Ridge Vineyards in Santa Cruz and turned into a 2 year full time position under the tutelage of winemaker Paul Draper. From there Gary worked his way around California a bit and continued his journey to Oregon only to eventually head back home to Oz. Jamsheed represents the past and future of creative wines from down under. These wines break the mold of conventional philosophy toward Aussie wines. Not because he is doing something abnormal, rather the opposite. Gary views terroir as the sole focus of his wines and the expression is the goal. This is certainly not a 'new' concept. Moreover, Gary strives for flavor, precision and balance in his wines...again, nothing new here.

"A joyful, pink Pet-Nat, with a lovely perfume. Refreshing nose with strawberries, rose water and a lemony tang. High acid but well balanced. Built for