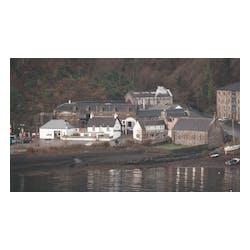 Ledaig Distillery is located in Tobermory village, on the Hebridean island of Mull. The distillery started its life as one of the oldest distilleries in Scotland, in 1798, under the name of Ledaig, which means safe haven. The distillery was founded by John Sinclair, and today it is known as Tobermory Distillery. He was actually originally told to build a brewery. Ledaig experienced numerous mothballs and takeovers. In 1837 it was mothballed for 41 years, and until 1916, various owners managed the distillery. In 1916, DCL bought the distillery, but it closed again after 14 years. After this period, a Liverpool shipping company purchased and renovated the distillery, renaming it Tobermory. In 1993, Burns Stewart Distillers purchased the distillery. This was the start of the golden days. Tobermory does not operate at its full capacity of 1m liters, but it does produce 750k liters per year. Mishnish Loch is the source of water used in the distillery. Although the barley used in the distillery is unpeated, the water source is filled with peaty phenols, which gives Tobermory a slightly phenolic character. There are four washbacks and two pairs of pot stills, with a 5 ton cast-iron mash tun. There is little storage in Tobermory, thus casks are stored in the sister distillery Deanston.