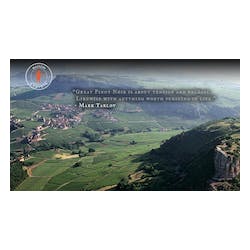 For some 20+ years, Old Bridge Cellars, led by Rob Buono and Gavin Speight, has imported, marketed and produced wines from a handful of fiercely independent wineries in the world's leading wine regions. Their parameters have remained the same and are, simply, that the wineries they represent remain true to their regions and true to themselves. Fast forward to 2011, when a mutual friend innocently suggested that Gavin Speight meet the then stranger, Mark Tarlov, for lunch. It didn't take long for the two to get fired up and interested in working together in Burgundy. Immersed in a religion of Pinot Noir, so to speak, their drive has evolved to make regionally expressive Pinot Noir from the best vine rows around the world. Driven by a tireless hunt for elusive sites where Pinot Noir shines, Maison L'Envoyé traverses the globe with the intention of presenting the acme of regionality and winemaking styles. With winemaking footprints in Burgundy, Willamette Valley, Central Otago and Tasmania, we champion many unsung growers who have farmed their vineyards for decades and generations, some mere feet away from more illustriously cited neighbors.

Wine Enthusiast 90 This Napa-based négociant makes a wide portfolio of Pinot, including several from the Willamette Valley. This is sharp and focused, framing moderately ripe