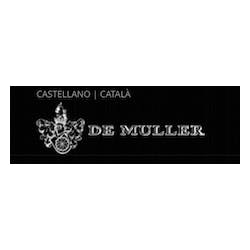 De Muller Vermouths have been made using the same recipe since their founding, almost 70 years ago. Over 150 botanicals are used, many of which are native to the winery's Mediterranean setting. Today, their winemaker is Gemma Martinez. The winery is located in Reus, near the coast of the Mediterranean Sea in Catalonia. Reus is considered the epicenter of Spanish vermouth and De Muller is historically regarded as one of the top producers in the area. Their wines are made with a base of white wine, infused with 150 botanicals. Highly guarded, the recipe includes cinnamon, orange peel, chamomile, rosemary, ginger, oregano & vanilla. The wine is then fortified with Melazas, a liquor made from molasses, and lightly sweetened. Their Vermouth Reserva is produced in a manner similar to Sherry and was recently named "Best Vermouth in Catalonia." The wine is aged for a year in used oak barrels, giving it more body and smoothness than traditional vermouth. While delicious in a mixed drink, De Muller Vermouths are traditionally enjoyed neat, on ice or with soda. Depending on the type of wine, they are customarily served either with an orange slice, lemon twist or olive for garnish.

Producer Notes De Muller Vermouths have been made using the same recipe since their founding, almost 70 years ago. Over 150 botanicals are used, many of