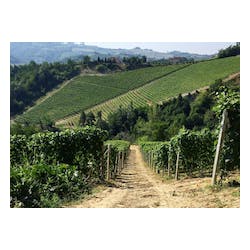 The steep slopes of Seghesio's winery in Monforte d'Alba were not always carpeted in vines. It wasn't until 1964 when Ettore Seghesio, a tenant farmer working the land, saved enough money to purchase the farm from its owners – and had the foresight to plant vineyards of Nebbiolo! For many years, the family's grapes were sold off in bulk to other producers in the region. In 1988, Ettore's sons, Aldo and Riccardo, took over the family estate and began bottling wine under the Seghesio label. Their outstanding terroir, together with a perfect blend of traditional and modern vinification methods, results in the production of lovely wines that have been greatly praised by the Italian and international press. Riccardo is now at the helm of the estate after Aldo's sudden passing in 2010. In addition, Aldo's two sons, Sandro and Marco, and his daughter, Michela, now work full-time at the estate. This is truly a family operation steeped in tradition. Farming Practice:Practicing Organic

Vinous Media 93 "Seghesio's 2013 Barolo La Villa is relatively open-knit and soft for a young Monforte Barolo. Beams of acidity and tannin give the wine

Wine Advocate 92 "The 2008 Barolo is impressive in this vintage. It bursts from the glass with tons of richness and concentration for the year. Dark

Robert Parker 93 "I was completely floored by Seghesio's 2006 Barolo La Villa, easily the best vintage of this wine I have ever tasted. Dark plums,

Wine Advocate 93 "I was completely floored by Seghesio’s 2006 Barolo La Villa, easily the best vintage of this wine I have ever tasted. Dark plums,

Wine Spectator 92 "Aromas of crushed dark fruits, dried mushroom and dried rose follow through to a full body, with velvety tannins and a long finish.

Wine Spectator 95 "What a beautiful nose, with flowers, licorice, ripe fruit and fresh leather. Full-bodied, with velvety tannins and a wonderful ripeness of fruit, yet