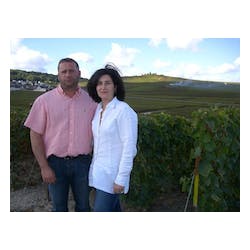 Jean Lallement (Lall-Mont) is an estate of only four hectares split between Verzenay and Verzy in the Montagne de Reims. A tiny producer, one of the smallest in this portfolio, but what wines! Original, complex, distinctive and yummy, all from a young vigneron who's restlessly improving every year. The vineyards are spread between Verzenay and Verzy both grand cru villages, with small holdings in the premier cru of Ludes. Alex Lallement explained the terrior of Verzenay as more masculine and higher in elevation, while Verzey is more feminine and perfumed. The majority of Lallement's holdings are in Verzenay whose characteristic flavor Lallement's virile style exemplifies. If it were Burgundy it'd be Nuits-St.-Georges; animal and sauvage. Lallement's vineyards are about eighty percent pinot noir and twenty percent chardonnay, as you'd expect in these parts. There are twenty different parcels, about half of which are older than 40 years. Lallement allows all of his wines to undergo malolactic fermentation and now produces 4 wines. His Brut is a blend of two years from younger vines in his holdings in Verzenay and Verzey, about 80 percent and 20 percent respectively. The Brut Reserve is the same blend of vintages and villages, but from parcels that are 30 years and older. Lallement started making a Réserve Rosé in 2003. It's a non-saignée, 100 percent Pinot Noir Rosé, a proportion of which is still red wine vinified in 205 liter barrel. 1800 bottles of the Rosé are produced. For the first time, Lallement will release a Vintage Champagne (2006) which will be available in minute quantities. Only 750 bottles of the 2006 were produced and it sold out immediately. We eagerly await the release of the 2008 Vintage sometime in 2014.Region: Montagne de ReimsPremier cru sites in LudesGrand cru sites in Verzenay and VerzyTotal vineyard holdings: 4 hectaresAnnual production: 1,700 casesVines: 80% pinot noir, 20% chardonnay Jean Lallement et Fils (VERZENAY) "Puisieulx, Sillery, and Beaumont-sur-Vesle obtained their grand cru status thanks to their proximity to Verzenay. The 420 hectares (1038 acres) in the village provide the blackest grapes in all Champagne. How the northern slopes in one of the most northerly wine-growing villages in the world produces such rich, peppery, and virile Pinot wines is one of the great mysteries of viniculture. The majority of the northern sites in the village actually lie more to the northeast, and thus enjoy the sun's rays for a substantial part of the day. Just as in Mailly, the vineyards are caressed locally by a warm air current. . . . Even the Chardonnay grapes cultivated in the village have enjoyed grand cru status since 1972. . . . As a Pinot village, Verzenay is definitely the genuine star of the Montagne de Reims. . . . Verzenay Champagnes betray a very strong and individual fragrance. Pepper and iron notes mix with the aroma of the grape. It is persistently long and hard for many years before it settles down to utter perfection [Lallements] love straightforward, unaffected, dry, rich wines. They have ample opportunities to make these wines from their 4.5 hectares in Verzy, Verzenay and Ludes. Eighty percent of the land is covered with Pinot Noir, and 20 percent is sown with Chardonnay. The average age of the vines is twenty six years old. The wines, which are very clean and dry, have at most only three grams of sugar added." -Richard Juhlin, 4000 Champagnes

Wine Advocate 93 "Disgorged in December 2017, the 2012 Brut Millesim Grand Cru Verzenay bursts from the glass with an expressive bouquet of pears, acacia honey,