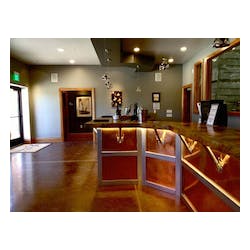 Jason & Janu: Husband and wife team Jason and Janu Goelz bring a fun, hip approach to their limited JS releases of traditional Bordeaux varietals and their Silicon Valley Wine Company "Tech Series" labels. They are part of the region's new generation of artisans, reinventing the Santa Clara Valley's winegrowing reputation. Jason Goelz graduated from Cal Poly, San Luis Obispo with a degree in Business Administration and the first ever "Wine and Viticulture" minor. Jason gained experience in the world of finance with stints at dot.com startups and investor groups, and the real estate department at Apple. Jason began Jason-Stephens Winery in 2008. His received early national acclaim for his "pure" take on varietal classics and exciting blends. Jason employed cutting edge cellar technologies unheard of for such a small operation; an automated fruit sorting system, precise humidity control, temperature controlled tanks. The most exact wine press on the market. All tools that allowed Jason-Stephens complete quality control from vineyard to bottle. Janu Goelz graduated from the University of San Francisco with a degree in International Business. Prior to finding her calling in the wine industry, she played two leading movie roles in India, started her own clothing line, and was a Weather Anchor for a local TV station. After meeting husband Jason, Janu took her interest in wine to the professional level, completing Sommelier Certification, the Wine Executive program at U.C. Davis, and also became a Certified Specialist of Wine. As a partner and JS' Assistant Winemaker, Janu is "hands-on" in developing the styles and future direction of the brand.

Wine Enthusiast 90 "Plummy aromas meet with sunbaked soil and lots of earthy herbs on the nose of this bottling. Grippy tannins and buoyant acidity frame