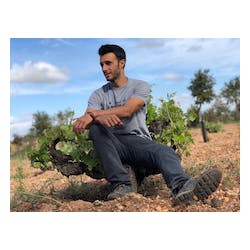 Toro is like the 1980s – big shoulder pads, teased hair and a gaudy energy that seems to be chemically enhanced. It's a DO that in most regards is caught in a time warp, much like that mauve and teal bathroom you've been meaning to remodel. Having built its reputation on a style of wine that is now decidedly out of fashion, Toro is long overdue for a breath of fresh air – or in the case of Alvar de Dios, fresh wine. Alvar was born and raised in the village of El Pego near the southern boundary of DO Toro. His family had tended vineyards in the village for generations but Alvar didn't stay in Toro to learn his trade, rather he fell in with a pair of vinous rebels working in the Sierra de Gredos – Fernando Garcia and Dani Landi. While working as the cellar master for Fernando at Bodega Marañones, he began acquiring vineyards of his own in and around his native DO, splitting his time between the Gredos and Toro. His first vineyard was inherited from his family in the village of El Pego in 2008. This site, called Aciano in honor of his grandfather, totals 3 ha of mainly Tempranillo at an elevation of 710m and planted on a unique terroir for the DO – sand. This sandy soil is resistant to phylloxera which is why these ungrafted vines, planted in 1919, have survived to this day. Since taking over this site, Alvar has farmed it organically, waiting until 2011 to make his first vintage. In 2009 Alvar purchased Vagüera, a tiny half hectare plot of abandoned vines at an elevation of 950m just south of the legal border of Toro near the village of El Maderal. This is a fascinating terroir – a shallow rocky red clay soil over limestone, north facing, and sheltered by a cork oak forest. Untended since 2006 this site is a bewildering mix of white varieties. Alvar so far has identified Doña Blanca, Albillo Rojo, Albillo Real, Albillo Negro, Albillo Castellano, Moscatel de Grano Menudo, Muscat de Alexandria, Moscatel Rojo, Godello, Verdejo, Palomino Fino, and Malvasia. There are at least another 5 varieties that Alvar is yet to identify. Records indicate that this vineyard was planted in 1921. Having left his native DO with the purchase of Vagüera, Alvar became interested in the nearby and newly created DO of Arribes and the surrounding area. Officially recognized in 2007, Arribes is where the Duero becomes the Douro as it carves a steep valley out of the granitic mountains forming the border between Spain and Portugal. Here he found not only soils reminiscent of the Gredos – granitic sand with a lot of mica – but a range of indigenous varieties capable of expressing elegance and freshness. Near the town of Fermoselle, Alvar located a vineyard, Camino de los Arrieros, of 40-60 year old vines of Juan Garcia, Rufete Trincadeira Preta, Bastardo as well as some other unidentified varieties. Just outside the boundaries of Arribes Alvaro has identified two additional, tiny, enclosed vineyards – Las Vidres planted with Doña Blanca and Yavallo planted with Bastardo, Rufete, Tincadeira Preta, Mencia and Doña Blanca. In addition to his single vineyard wines, Alvar makes a wine from three plots of vines located in the northwestern part of Toro. Ranging in age from 25–40 years old, these Tempranillo vines are grown on a variety of soils. Named Tio Uco, this wine like those from his single vineyards, is made from organically farmed grapes, fermented whole cluster with indigenous yeasts, sees only a gentle maceration by foot and is aged primarily in neutral French oak barrels ranging in size from 300-1000L.

Learn More
1 items
Alvar de Dios Camino de Los Arrieros 2017
$21.33 $16.95
Wine Advocate 91 I tasted two very different vintages from the village red from Villadepera, the much warmer and drier 2017 and the radically different 2018.
Item Sold Out
Subscribe to our newsletter!