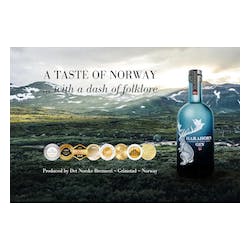 Gin inspired by a rabbit with horns? Sure, we're in Norway, baby! Det Norske Brenneri, or "The Norwegian Distillery" in English, is based in the lovely town of Grimstad in the southern part of the country (it's where Roald Dahl's grandparents lived). They're the first private distillery in Norway ever since the government dissolved the state monopoly on Spirits-making in 2005, and they've been making everything from apple Brandies and Whiskeys to Aquavits and Gins. They swear on traditional methods and small batches -- they only produce 300 liters at a time. Naturally, DNB only uses local Norwegian berries and herbs, which have a very unique and specific taste thanks to the environment and the climate. Now about the cool name and that horned hare. Harahorn Gin is named after a mountain in Hemsedal, one of the most pristine mountain areas. The chimeric beast on the label is the lepus cornutus, a huge rabbit with deer antlers, thought to be real in the 16th and 17th centuries. Thank goodness we're not that silly today, eh? The Gin itself uses the Norwegian potato liquor as the base and contains Røros juniper, anise, Nordmarka blueberries, Grimstad rhubarb, Oppdal angelica, seaweed, wild Sunndal marjoram, and 16 other Norse herbs. Some say it's one of the best Gins on the planet, but what's certain is they got the 2019 USA Spirits Ratings award for the Gin of the Year.