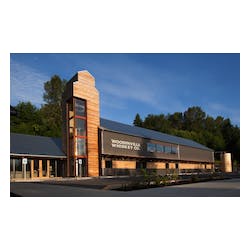 The story of Woodinville doesn't begin with a 100-year-old recipe or generations of family distillers. It begins with two best friends and a dream. The dream is to make the greatest craft whiskey in the world by bringing the time-honored traditions of bourbon production into a craft environment -- using the highest quality locally grown grains, the best barrels and coopers in the world, the most technologically advanced distilling equipment, and the mentorship of an industry icon, David Pickerell, former Master Distiller for Maker's Mark. And while the story is still unfolding, after being awarded "Craft Whiskey of the Year" and "Craft Rye Whiskey of the Year" two years in a row by the American Distilling Institute, and "Best Straight Bourbon" by the San Francisco World Spirit's Competition, things are headed in the right direction. Woodinville is essentially a zero waste facility. In addition to only using non-GMO grain grown by a single family farm, all spent grain used in the whiskey making process is delivered to local dairy farms and used as cattle feed, putting it back into the lifecycle stream.

The high rye content in this mash bill really pops! It brings a plethora of spice to the fore of both the nose and the

Woodinville 100 Straight Rye Whiskey 750 ml This 100 rye starts with pure, traditionally-grown rye cultivated exclusively for us on the Omlin family farm in Quincy,

The Whiskey: This expression is Woodinvilles award-winning five-year-old bourbon taken up a notch. That means youre getting that grain-to-glass experience of local Washington craft along with