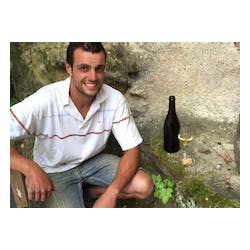 30 year old Florent Cosme has deep roots in Vouvray, with his family having been in the village for generations. Being the youngest sibling in the family, the vineyards originally owned by his grandmother, went to his older brother Mathieu. This small speed bump would not stop young Florent from pursuing his dream of making wine in his sacred home village. After finishing oenology school, he took a full time position with famed Vouvray producer Vincent Careme as one of his key vineyard managers. In 2010, he quietly accrued some beautiful, old vine parcels along the Premiere Cote of Vouvray (the steepest and rockiest section of Vouvray – home to the best vines of the village). During nights and weekends, he would work his 4 ha of vines biodynamically, eventually making his first vintage in 2011. Today he has committed himself full time to his small, but growing domaine. Only indigenous yeasts are used, never any malo, and the wines are aged in older 400L barrels. With his small domaine, Florent is part of a young and talented group of vignerons who have elevated this noble appellation through biodynamic farming and non-interventionist winemaking. Farming Practice:Certified Biodynamic