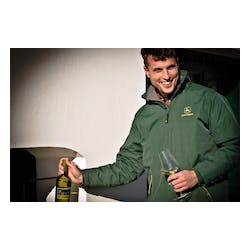 The Direder farm is located in the village of Mitterstockstall in the Wagram region. The Wagram roughy consists of a 25-mile long ridge between the towns of Krems and Tulln with soils made up of ancient gravel sediments from the Danube River as well as layers of loess that formed in the ice age which cover the substrate of marine deposits and river gravels. The name Wagram comes from "Wogenrain" meaning "shore". Paul Direder is the current caretaker of the Direder Farm which dates back to 1849 with Paul's great-great grandfather Leopold. At the age of 16, when he was still a student and with the support of his mother, Paul leased the farm from his grandparents. At this time the farm consisted of 86 acres of agricultural land, only 10 of which were devoted to vineyards. The vineyards have since been expanded and current production is roughly 80,000 bottles. Meanwhile, Paul graduated with a degree in viticulture and oenology as well as agriculture. Paul has farmed sustainably since he took over the farm and in 2020 he decided to work towards organic certification.

Gruener Veltliner is by far the most important white wine in Austria. Thanks to the deep loess in his vineyards, Hundsberg and Kirchenfeld, Paul D.