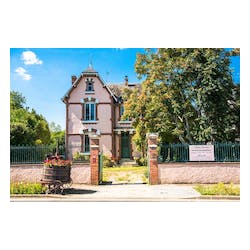 When tasting the wines of Denis Jamain, it is clear that the appellation of Reuilly, in the eastern Loire, is experiencing a renaissance, moving far beyond its former status as the "poor man's Sancerre." This land was once a source of great pride, having been part of a gift of the 7th century king, Dagobert, to the Royal Abbey of Saint Denis. Phylloxera had ravaged the majority of the vineyards here in the late 19th century, but Camille Rousseau (Denis' maternal grandfather) had faith in the future of Reuilly. In 1935, he planted his first vines here, in addition to farming a large oak forest on the outskirts of town. Denis shares his grandfather's passion for the vineyards and the forest, as well as his hometown pride. Though he studied in the United States and speaks excellent English, this charismatic and friendly gentleman wanted nothing more than to return home to take over the family domaine. In 1990, Denis began adding to the family holdings. Today, he farms a total of seventeen hectares in the heart of the appellation, with eleven planted to Sauvignon Blanc, four planted to Pinot Noir, and two planted to Pinot Gris, which makes his superb and distinctive Reuilly rosé. The soils here are rich, resting on the prized Kimmeridgian limestone, a geological chain that connects the Loire Valley with Chablis in Burgundy. This limestone is valued for its high content of marine and shell fossils dating back 150 million years ago to the Jurassic period. These minerals are without equal for producing some of the most beautiful whites in France. Denis has been practicing sustainable agriculture for many years and has recently started the conversion process for organic certification. Though he uses both stainless steel tanks and oak, Denis is very proud to be able to select special oaks from his grandfather's forest to make his barrels. This is the concept of "local" in its purest form.