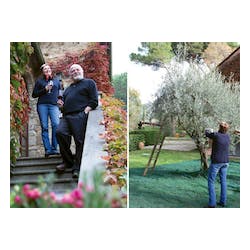 Renato Vicario and Janette Wesley own and operate two organic and sustainable farms on both sides of the Atlantic Ocean in his native Piedmont and her native South Carolina. Their spirits are crafted and sourced only from grains and fruits that are not genetically modified (no GMO company policy) and do not use any chemical additives or flavors. In fact, many of the fruits, herbs, and spices used to create Vicario's liqueurs are grown on their own farms. Vicario and Wesley named their Tuscan farm "The Garden of Earthly Delights," which is reflected in the imagery on their bottles--details from the Hieronymus Bosch painting of the same name. After many years of making liqueurs in Italy, Renato Vicario wrote a book entitled "Italian Liqueurs" to share his knowledge. Steeped in regional, mythical, and historical traditions, Vicario Liqueurs are made with the same traditional methods as they have been for centuries.

Tasting Notes "An infusion of the highest grade green walnuts, macerated with selected herbs and spices to create a full, rich, and seasonally appropriate bouquet.