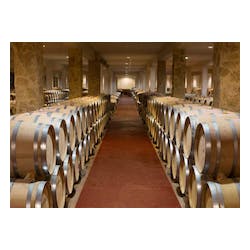 Founded in 1903, the 200-hectare Finca Torremilanos in Aranda de Duero is the second-oldest wine-producing estate in what is now Ribera del Duero DO (after Vega Sicilia). The current regime dates to the late 70s and was instrumental in the establishment of the DO in 1982. Pilar Pérez Albéniz, one of the most respected women in the region and winner of the inaugural 'Ribera Heritage' Award in 2019, is still at the helm, with two of her sons, Ricardo and Vicente, handling winemaking and sales respectively. The first-ever Demeter-certified biodynamic winery in the appellation, as of 2015. A family-run gem that marches to the beat of its own drummer in producing both traditionally-styled and experimental wines. Farming Practice:Certified Biodynamic

Vinous Media 91 "Bright ruby. Smoke- and spice-accented cherry and black currant aromas, along with subtle floral and camphor flourishes. Sweet and penetrating on the palate,

The Wine This blend of 95 Tempranillo and 5 Cabernet Sauvignon is aged in French oak for 20 months. The average age of vines