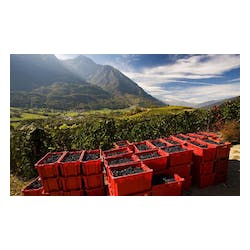 The Valle d'Aosta, in the extreme northwest of Italy, is tucked into the Alps and bordered by France and Switzerland. It's Italy's smallest region, with only 1260 square miles (approximately the size of Rhode Island). The extreme growing conditions and climate make viticulture here a heroic act, but one much rewarded: The high elevation vineyards and French (or French derived) varietals make wines of exceptional elegance with a continental pedigree but Italian flavor--here the clash of cultures at the border has created something wonderful and unique. The tiny Triolet winery is located in Introd, Aosta, on the south side of the Dora Baltea river and just three miles from the spectacular peaks of the Parco Nazionale del Gran Paradiso. The Martin family runs the winery as well as a small agriturismo all at 760 meters (2500 feet!) above sea level in a historic building dating back to 1656. The history of the winery is comparatively short: it was founded in 1993 by Marco Martin, who had learned his trade growing up in a family of vignerons, and eventually working as a viticultural expert for the regional (and autonomous) government of Valle d'Aosta. His Pinot Gris vineyard is located at the staggering altitude of 900 meters above sea level, while his reds are between 600 – 800 meters above sea level. Marco now owns five hectares in the towns of Introd, Villeneuve and Nus, which are planted to Pinot Noir, Gamay, Fumin, and Syrah as well as Gewurtztraminer and Muscat. The vineyards are planted in sandy soil of morainic origin rich in minerals. The savory, fresh and elegant wines express the essence of the mountain terroir, and the wines' aromatic complexity, derived from the extreme changes in night and day temperatures, is beguiling. Farming is done with the utmost respect to the environment; Marco uses integrated pest management and only organic compost to fertilize. Farming Practice:Practicing Organic

The Wine 100% Pinot Noir sourced from 0.80 hectares of 15 year old vines at 700 meters above sea level. The fruit is destemmed, macerated