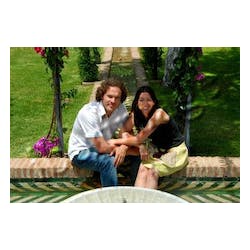 A joint project from René Barbier of Clos Mogador and his wife Pérez of Mas Martinet, that was started in 2001. René and Sara purchased a small old vine "coster" (steeply sloping, traditional) vineyard in Priorat called Els Bellvisos. This vineyard had been abandoned and it was fascinating, sitting right in the middle of a steep grove of holm oaks, spectacular. Together with Sara, the husband and wife couple brought the vineyard back into production. It was an uncompromising location, which lent itself to making wines which were "at one with nature." This project is based on the couples philosophy on life: a sustainable, organic project where they could close the circle of life. Farming Practice:Practicing Organic

Wine Advocate 95 "The red 2014 Gratallops Vi de Vila Partida Bellvisos is from the second consecutive year with (relatively) good rain, and it rained during

Wine Advocate 96 "This has a lot of character, great acidity and fine minerality, with a clean, very focused finish. It's still young but approachable and