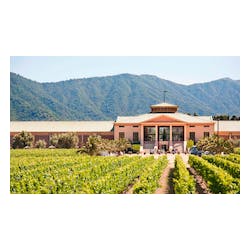 Viña Casablanca is the boutique winery of the Carolina Wine Brands holding, one of Chile's premier wine producers, which for more than 140 years has been producing and selling high quality wines to consumers all over the world. Owned by the Larraín family, CWB is part of the Watt's S.A. holding.Viña Casablanca began its operations in 1992 and its area under vine currently consists of 80 hectares distributed mostly in the Nimbus, El Chaparro, and La Vinilla Estates.In 2011, Viña Casablanca signed a Joint Venture agreement with Laroche Chile –a member of the French holding AdVini.

This Sauvignon Blanc has a pale yellow color with soft green hues. On the nose it has notes of tropical fruits such as lychee and

James Suckling 92 "An elegant, medium-bodied sauvignon blanc with fine citrus and cassis character, plus delicate touches of basil and bell pepper and a long, polished

James Suckling 92 This is a layered and pretty Sauvignon with sliced pear and celery character. Medium-to-full body, bright acidity and a clean finish. One of

Wine Enthusiast 87 " Briny citrus aromas are mild to the point of quiet. This clear-looking SB is in solid shape on the palate. Peppery lightly

Wine Spectator 87 "Notes of white pepper give the lemon-lime flavors a lively spiciness. Offers a minerally finish, with plenty of acidity."~KM Wine Enthusiast 87 "Initially this is