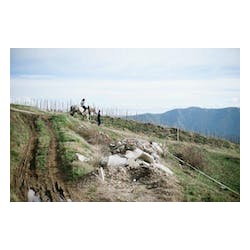 No one is more revered in the Northern Rhone than Noël Verset. But it is not widely known that Noël had a brother, Louis, who also made fine wines from the family's ancient vines. Louis was never well-known here in the U.S.; his output was even smaller than Noël's and his wines were never imported. And, while Noël finally retired in 2007 after 63 vintages, Louis stoppedmaking wine in 1994. Today his wines are impossible to find. Yet, Louis had a son, Alain, who took over the domaine upon his father's retirement, and changed nothing. He continues to make fine old-school Northern Rhone wines, still bearing the mythic Verset name. Alain inherited his vines from both father and uncle. Louis' vines are in the great Reynards, Mazards and Les Côtes crus, but amount to only about a hectare. The Verset approach, steeped in history, tradition and terroir is on full display in Alain's beautiful wines. Don't miss these rare gems.

Notes of cooked apple & pear. The palate is soft, a touch light and elegant, but holds richness, ends on flowers, and a touch of