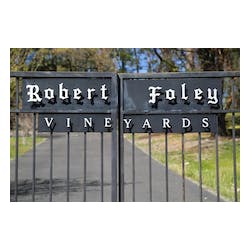 Robert (Bob) Foley began his wine making career in the Napa Valley in 1977, having just graduated from UC Davis with degrees in both Viticulture and Enology. He spent his first year working for Heitz Cellars, followed by 15 years as the founding winemaker for Markham Vineyards. In 1992, Bob began another 15 years as the founding winemaker for Pride Mountain Vineyards. During this period, he also created the highly acclaimed Switchback Ridge, Hourglass, Paloma, and School House wines. He now focuses mostly on Robert Foley Vineyards wines, but also creates the offerings from Shelter, Padis Vineyards, Engel Family, Herson Family Vineyards, and JennaMarise in the Napa Valley. In 1998 Robert Foley Vineyards bottled its flagship Claret and has since expanded and diversified its production to offer more of the big reds Bob is famous for – Petite Sirah, Merlot, Charbono, the limited-release Howell Mountain Cabernet Sauvignon and Howell Mountain Merlot from our estate property, a Carneros Pinot Noir, a Napa Valley Cabernet Sauvignon, an Atlas Peak Cabernet Sauvignon called Kelly's Mountain Cuvée, a Mount Veeder Cabernet Sauvignon, and The Griffin (a blend of the best in the red cellar). Bob has also bottled three of his favorites: a medium-bodied Chardonnay, a Syrah that we call Kelly's Cuvée, and a Port-style dessert wine named Conclusão. Bob's reputation for producing very expressive wines that finish gracefully continues to develop at his winery facility on Napa County's Howell Mountain, where more than 1,500 barrels are housed in an extensive cave system (completed in 2008) for the production of Robert Foley wines. Robert Foley Vineyards is a full-time staff of three that handcrafts the wines (Bob) and run the office (Kelly and Shannon). In the tasting room, Kelly's dad Jerry helps out from time to time. Mina, Spike, and Magoo are the feline Office Interns in charge of treats, naps, and distraction, while Princess Bella presides as our official Winery Cat. When Bob's not making wine, he spends time with his wife (and RFV's business manager) Kelly Kehoe, and his children and granddaughters. You can also find him singing and playing guitar in The Robert Foley Band or SCUBA diving.

White peach, star jasmine and gardenia aromas mingle with a trace of vanilla. Bright fresh flavors evolve on the mid-palate and vibrantly burst in a delicious framework

This delicious white is created in the style that Bob Foley personally prefers, avoiding the heavy hands of malolactic fermentation and excessive oak. The aroma

Pride Mountain – crafts a big, bold red in this rare Charbono that can rival the best Cabernet or Bordeaux blend, at a fraction of