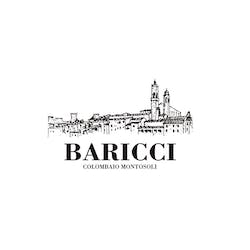 "Nello Baricci, the founder of the estate was born in Montalcino in 1921. In 1955, with the few savings of a lifetime, he bought the Eastern slope of the Montosoli hill, a very special place with a long tradition of Sangiovese cultivation going back to the Middle Ages. The Montosoli hill was already famous for the production of high quality wines thanks to its exceptional combination of soil composition and micro-climate. When the Consorzio del Vino Brunello di Montalcino was established in 1967, Nello Baricci was already considered a master of Sangiovese. The first bottle of Rosso di Montalcino was produced in 1968 and the first Brunello in 1971. Today Baricci is the only producer to have all his vineyards (5 Hectares) in the Montosoli "Grand Cru"."