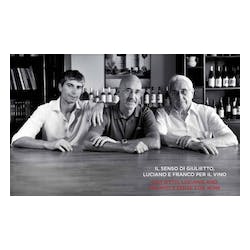 It is on the southeast border of the Garda amphitheatre dating from the end of the Ice Age. This area has long been recognised as a vine growing district, indeed in 1848 the land was registered and classified by the ruling Hapsburg authorities in the first and second quality categories. This was based not only on quality but also on consistency of good production, essentially due to the capacity of the soil to stay moist in hot seasons. La Cavalchina fu teatro di battaglie nel corso della I e II guerra di indipendenza; a testimonianza della battaglia del 1866 rimane un obelisco di ardesia marrone che ricorda il ferimento del principe Amedeo di Savoia. The Cavalchina district was the site of both first and second War of Independency during the Risorgimento. The memorial basilisk to the 1866 battle is at the entrance to Cavalchina's estate; it commemorates, in particular, the Prince Amedeo di Savoia wounded at the battle. The Azienda Agricola Cavalchina was created in the early 1900s with the purchase of the first vineyards. Later the cellar was built and originally included a distillery, which was in use until 1967. By the 1960s the Piona family felt that the white wines of Custoza deserved better recognition than simply being labelled as Soave. From 1962 they were the first producers to label their white wines made from Fernanda, Trebbiano and Garganega with the Custoza name and to promote the name in key markets around Italy such as Rome and Milan.

Wine Enthusiast 92 "Black olive, mature blackberry, tilled soil and a hint of game are some of the aromas you’ll find on this earthy, alluring wine.

Wine Enthusiast 92 "Black olive, mature blackberry, tilled soil and a hint of game are some of the aromas you’ll find on this earthy, alluring wine.