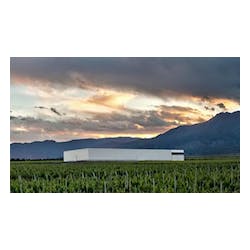 French winemaker and famous wine consultant Michel Rolland has earned a reputation in Argentina and around the world for his ability to find unique vineyard sites that can produce the highest quality grapes. The Mariflor vineyard has come to life based on a vision Michel and his wife, Dany (also an acclaimed winemaker), had when they first laid eyes on the Uco Valley's rocky soil and dessert climate set against the Andes peaks. Michel and Dany first set foot in Argentina in the late 1980's in Cafayate. Over the following decades Michel's consultation projects led him to form a partnership venture known as "Clos de los Siete." The Clos de los Siete campo is 2,100 acres that has been divided into individually owned vineyard properties that produce independently owned and named wines, similar to the operation of a Bordeaux Chateau. The Mariflor vineyard, which spans 247 acres of the Clos de los Siete estate, is managed exclusively by Michel and Dany. A majority of the vines, 148 acres, is dedicated to growing Cabernet Sauvignon, Syrah, Merlot and Cabernet Franc. Mariflor also grows Pinot Noir, Sauvignon Blanc and Petit Verdot. A portion of the yield from the Mariflor vines also contributes to making Clos de los Siete wines. Until the 2009 vintage, the grapes of Mariflor were vinified at the Bodega Monteviejo in collaboration with winemaker Marcelo Pelleriti. Today everything is produced at Bodega Rolland, the last winery built at Clos de los Siete. The Mariflor Pinot Noir is a must-try variety; grown at an astounding 3,600 feet Mariflor's Pinot is full of elegance with a taste of ripe fruit and good acidity and balance. The taste will leave you remembering the Uco Valley for more than its Malbec producing potential.

Mariflor Pinot, it’s silky elegance with a nose of ripe raspberries and wild berries. Well-balanced between sweetness and structure that can be appreciated young and