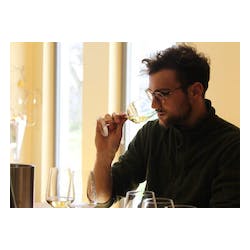 The Carl Loewen estate dates back to 1803 when an agent in Paris purchased a set of vineyards and buildings owned by the Maximin order. This sale was part of an auction used to generate money for the Napoleonic government after secularization. An agent made a purchase which included the Maximiner Klosterlay, Maximin Grunhaus in the Ruwer, and Maximiner Herrenberg in Longuich. Interestingly, the purchase also included an administration building for the Maximin order that was sold to the Piedmont family in Filzen. Today, this is the family home and shares architectural details with the house at Grunhaus. The agent then split up the properties and sold them piece by piece to generate more money. It is for this reason that the Grunhaus today includes such large blocks in the Abtsberg – that property was sold to a single family, the vom Schuberts. The Maximin Klosterlay was the first site acquired by the Loewen Family in 1805. Weingut Carl Loewen has grown over the past three generations from 1ha to 15 today. The estate is currently run by Christopher Loewen and his father Karl-Josef. in the late 1980s and 1990s, Karl -Josef was always looking for old vineyards and grew the Estate by purchasing steep old vineyards (low yielding) that no one wanted to work anymore. Now the estate is spread over 4 villages – Leiwen, Longuich, Detzem, and Thörnich. More than 50% of the holdings are ungrafted, very old vines, from 60-120 years old, and on steep slopes. In 1998, Karl-Josef bought his first parcels in the Thörnicher Ritsch vineyard, the second steepest vineyard in Germany, second only to Bremer Calmot in the lower Mosel. Karl-Josef had visited a wine fair in Thörnich and felt that the quality of the site, which is grey weathered slate and quartzite, was very high, but there was a sharpness, a green flavor, similar to Saar wines that he found. One of the first things that he did in this site was to cease the use of chemical fertilization. This is an important step and one that is taken immediately when vineyards are purchased by Loewen. Christopher notes that it takes many years for a vineyard to recover from these treatments and to come into balance; the first vintage that the winery made a dry wine from this site was 2008, a full ten years later. Part of the green flavor in vineyards with higher levels of fertilization is attributed to nutrition. Higher levels of nutrition make berries bigger, which in turn leaves less airspace between grapes, which means more moisture and an earlier onset of botrytis. Earlier botrytis means that the affected bunches must be harvested earlier, resulting in green, hard flavors. After the 2013 vintage, Karl-Josef purchased a top site in Longuich, 20 minutes by car from Leiwen, where the winery and Klosterlay are located. The site, the Maximiner Herrenberg was part of the original auction sale in 1803, sold to the Schmitt family in Longuich. Bruno Schmitt, the 6th generation to farm that site was getting older and without any heirs. He gladly sold the vineyards, Maximiner Herrenberg and Herrenberg to Karl-Josef. These two vineyards are part of the same hillside and are home to some of the oldest vineyards in the Mosel. The bottom section carries the name Maximiner Herrenberg and was planted in 1896. This section is closer to the Mosel river, benefiting from both reflective light from the river and a more common onset of healthy botrytis. The higher portion, simply called Herrenberg, is cooler and planted in 1903. From this Christopher makes a wonderful Kabinett in the style of those wines from 4 decades ago with lower residual sugar. The soils in these two vineyards are similar – Devonian era slate with a band of red iron and volcanic red soil running through these vineyards. Christopher notes that there is a band of soil that runs between Urzig and Longuich that carries this type of soil, which is very rare in the Mosel. Grapes are all pressed whole cluster up to 2 bar but the pomace is never moved. "when you move the solids, you break stems, which leads to phenolic flavors". The juice is "browned" or oxidized pre- fermentation. Ferments are completely natural without addition of enzymes or nutrition – single vineyard wines are bloc picked and go directly into Fuder barrels (around 1000L) which average 25 years old. A majority of wines are fermented and aged in fuder, while some of the basic qualities are fermented and aged in steel. Fermentation at this address is always natural, never inoculated, and without temperature control. Christopher explains that he likes the ferments to range from 12 to 23 degrees (C) in the cellar, where the average temperature is 11 degrees.

Learn More
1 items
Loewen 'Herrenberg 1896' Riesling 2020
$52.80 $39.95
James Suckling 99 " A moment of stillness in the midst of a crazy world. Take only a quick sip and youll understand rather little. But
Item Sold Out
Subscribe to our newsletter!