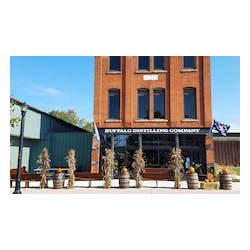 A DISTILLERY 100 YEARS IN THE MAKING.In 1883, Buffalo was recognized nation-wide for its innovation. It was during this time that an ambitious businessman named Gustav Fleischmann took control of the E.N. Cook & Co Distillers company and started the Buffalo Distilling Company. Spirits were high and BDC made some of the best, including Golden Grain Whiskey, 4C's Canadian Style Whiskey, Old Monongahela Whiskey, Old Tom Gin and Maple Gin. Our Bar Room has ephemera sharing the story of our name sakes original roots and an unopened bottle of the original golden grain whiskey, thought to be the only one left in existence. In 1914 Mr. Fleischman put the company to rest, presumably retiring ahead of prohibition. Buffalo Distilling Company went into a 98 year sleep before being formally re-established 98 years later on a farm distillery in Bennington, NY.

Premium Vodka made from start to finish in house with 100% local corn. Gluten Free. Clean body and smooth character. Youd be proud to bring