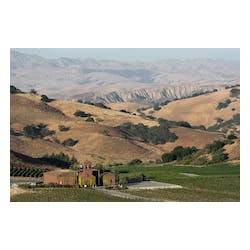 Located just 20 miles from the Monterey Bay, Eden Rift is the oldest continually producing vineyard in California. Planted in 1849 by Theophile Vache, the 120-acre estate rests on the San Andreas Faultline and is part of the Cienega Valley AVA. The winery is located just two miles from famed Pinot Noir producer, Calera whose founder Josh Jensen sought out the limestone and dolomite-rich soils. Before Josh, early vintners procured some of the first Pinot Noir planting in California at Eden Rift beginning in 1860. Post prohibition, the focus on Pinot Noir & Chardonnay was lost until Christian Pillsbury acquired the estate in 2016. Christian assembled a team of young industry professionals starting with winemaker Cory Waller to once again create some of California's most vivid energetic Pinot Noir and Chardonnay. The extreme terraces and diverse terroir in a single contiguous valley make California's oldest estate vineyard it's most exciting new project.

Wilfred Wong 93 "The 2017 Eden Rift Vineyards Estate Chardonnay shows up firm and nicely textured on the palate. TASTING NOTES: This wine is luxurious and