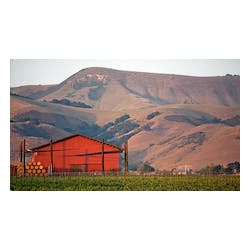 In 1973 Chamisal became the first winery to plant vines in Edna Valley, a gamble that paved the way for one of the most revered wine regions of California. Our Central Coast vineyard is named for the native, white-flowered Chamise plant that thrives on the property. In the early 1990's after a period of dormancy, the vineyard was replanted and the estate was renamed Domain Alfred, but when we took ownership in 2008 we restored the original name – Chamisal Vineyard – to honor its place in Edna Valley history. Now planted to five grape varieties including Chardonnay, Pinot Noir, Grenache, Syrah and Pinot Gris, this exceptional estate vineyard is the centerpiece, source and inspiration of Chamisal's bold and distinctive wines.

Wine Enthusiast 90 "Years ago, this stainless bottling was one of the first to establish the now common style. It offers aromas of poached pear and

Exploding with fresh, crisp fruit, the nose combines tropical pineapple, mango and banana with the citrus notes of lemon, lime and grapefruit - a testament

Our Stainless Chardonnay is distinct from our other wines, both in wine style and in fruit sourcing. Fermented in stainless steel and never touching oak

"This wine exhibits classic varietal characteristics with aromas of ripe pineapple, fresh Gala apples, pear and candied lemon. The palate has a weight that belies

"This wine exhibits classic varietal characteristics with aromas of ripe pineapple, fresh Gala apples, pear and candied lemon. The palate has a weight that belies