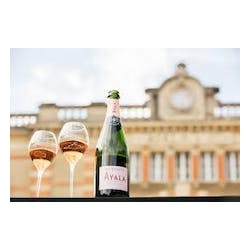 Ayala is one of the most exciting stories in Champagne today, almost the definition of a boutique Champagne producer. Independently owned, a small, young and dynamic team handles every step of production from grape reception to labeling in their jewel of a facility with incredible precision, crafting Chardonnay-focused wines that deliver immense pleasure, freshness, and elegance. Long known as the "sleeping beauty of Champagne," because of its prominence in the late 19th and first half of the 20th century, and its still stunning Art Deco cellars dating to 1912. Ayala was one of the 18 founding members of the "Grandes Marques de Champagne" syndicate in 1882 and went through a golden age in the 1920s and 1930s, when it was one of the largest houses in Champagne, and the drink of choice in bohemian Paris and London. Its re-ascent after a long quiet period began in 2005, when it was purchased by the Bollinger group in 2005. It is important to note that the estate is run completely separately from Bollinger. Last but not least, the immensely talented Caroline Latrive is winemaker, one of only 3 female cellar masters in Champagne. She has blazed a path in pushing for some of the smallest lot-by-lot vinifications in Champagne, always in search of refining the detail and complexity of her Champagne.

Wine Spectator 91 “Toast and spice notes enrich the lemon curd, glazed apricot and candied ginger flavors in this racy Champagne” Subtle and inviting, this wine is

Wine Spectator 93 " Tightly knit, this is more about the fine, china-like structure today, but nonetheless offers a pretty note of honeysuckle wafting through the