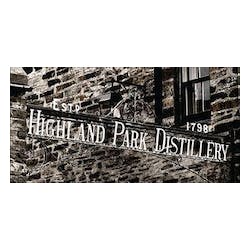 The distillery was founded in 1798, presumably by Magnus Eunson.[2] The name of this whisky does not refer to the area of Scotland known as The Highlands, but rather to the fact that the distillery was founded on an area called 'High Park' distinguished from a lower area nearby.Within the malthouse at Highland Park Distillery. Highland Park is one of the few distilleries to malt its own barley, using locally cut peat from Hobbister Moor. The peat is then mixed with heather before being used as fuel. The malt is peated to a level of 20 parts per million phenol and then mixed with unpeated malt produced on the Scottish mainland. In 1984, Highland Park was the only whisky ever to have scored a rating of 100% by the regular tasting team of The Scotsman, a national newspaper of Scotland. Whisky reviewer Michael Jackson has called it "The greatest all-rounder in the world of malt whisky.

Wine Enthusiast 96-100 "The aromatic profile is assertive yet welcoming, sweetish yet cereal dry, and oaky yet floral and a touch briny; the quintessential 12-year-old malt

"Sweet sherry with a hint of balsamic, wrapped around a toffee centre. Well-structured sweetness; aniseed balls and muscovado sugar with some smoke and apple crumble.

"Limited & Rare 444 bottles made. Matured in a refill Sherry Butt cask over 13 years in Orkney's cool Northern climate. This is the largest

Whiskey Advocate 93 A marriage of eight casks (seven hogsheads, one sherry butt). A whisky in excellent shape for its age. Very clean and bright on

" First up, the whisky is quite light in color, with a bit of a greenish cast even when its not in the blue-tinted bottle.

" Nose: Dusty baking spices and cocoa at first, cinnamon, vanilla, dates. Coffee cream Revels (possibly a couple of the orange ones too), a touch

"A spirited lift of dried bitter orange which quickly turns into lemon peels. Cardamom notes trick then tease the nose, before an enticing hit of

The long-awaited fourth and final entry in Highland Park's The Valhalla Collection. Odin (aka 'The Furious One'), is a rich and dark whisky with the

"Appearance: Color is pale gold. The whisky has fairly thin, watery legs that preclude the type of beading that comes with age. Lets try this