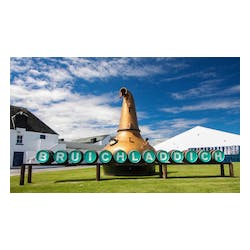 This Port Charlotte 10 year old has been conceived, distilled, matured and bottled on Islay alone. We are a young team with deep-rooted values, and

Our signature bottling, the Classic Laddie, is an unpeated single malt Scotch whisky that showcases our floral, elegant house style with a characteristic salt citrus

Whisky Advocate 91 WA TOP 20 2019 Rank 15 " Distilling with heirloom grains has become commonplace in the U.S., but much less so in Scotland. With

Bruichladdich has launched Black Art 8.1. The latest edition to the Islay distillerys unique collection of unknown cask type Whiskies has been aged for 26

From Bruichladdich comes an unpeated single malt Scotch whisky distilled from barely by eight family farms local to Islay. Aged in a combination of bourbon

Unpeated. Distilled in 2008, this vintage expression is hand-crafted from 100% Islay-grown Bere barley, the oldest strain of barley in Scotland. Rich and malty with

"The wild west Atlantic facing coast gave birth to this third release in our uber-provenance Islay Barley series. Harvested in 2006 and distilled in

"This fourth incarnation of the now legendary Black Art is as enigmatic as ever, the composition of casks a mystery to all but its creator.

Tasting Notes CHARACTER Refined, confident, a little extra age has tempered some of the vitality but this dram has gained a classic, timeless feel. AROMA Initially smoke, tar,

“Distilled from 100% Scottish barley in 2014, this expression has spent 5 years in first-fill American oak ex-bourbon casks. It might be a peat bomb,

Distilled in 2009 and bottled in 2019 at 108.6 proof, this expression has spent its decade in predominantly ex-bourbon casks with plenty of barrel-hopping wizardry

Nose - Slight floral chartacter on the nose, summery and bright. The peat smoke is slow to rise ionitially but comes through with a light

"Bruichladdich has made a commitment for future releases of organic single malt whisky. This first release is 100% Islay. The barley was organically grown by

THIS IS WITHOUT DOUBT THE MOST IMPORTANT RELEASE IN OUR HISTORY, AND VERY MUCH A LANDMARK FOR THE DISTILLERY AND THE BRUICHLADDICH TEAM. IT WAS

" What would happen if we used our Tall, long-necked Victorian stills to produce a heavily-peated Spirit? The Floral Elegance of Bruichladdich and heavy peat- could

"The world's most heavily peated whisky, this is the sixth edition of the uber-experimental cult Octomore. Titanic amounts of peat but with a light,

"Each release is a powerful illustration of the art of the master distiller. Each is necessarily unique, limited, finite, a celebration of nuance. It can

"This, OCTOMORE 07.3, IS the second release OF Octomore of Octomore - Octomore whisky made from barley grown two miles along the cost from the

A Gift Pack of three 200ml bottle of single malt Scotch whisky from the Bruichladdich distillery on the Isle of Islay. Excellent for those looking