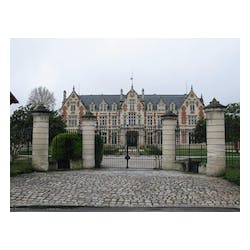 Grand Cru Classé in 1855 At the beginning of the 19th century, John-Lewis Brown (1769-1851), bought a vineyard and designed in the village of Cantenac, a traditional Tudor style château, reminding him of his Scottish origins. His name is forever linked to the Grand Cru Classé. His grandson, John-Lewis Brown (1829-1890) esteemed animal painter and "Chevalier de la Légion d'Honneur", spent time there during his childhood.In 1843, Mr. Gromard, banker, took over the estate. After the 1855 Grand Cru Classification, Louis Armand Lalande (1820-1894), Bordeaux winemerchant and owner of several estates in Médoc, extended the building. Surrounded by a remarkable British style park, Château Cantenac Brown is since then among the most original in Médoc. With José Sanfins in charge, methods have changed. The vineyard is managed in a more environmentally friendly way: the "sustainable approach" goes without saying.The vines are cared for throughout the year and yields are perfectly controlled.Strictly plant-based fertilizers are applied in a moderately and balanced way in tune with the needs of the vines.This respect for Nature explains why the Château Cantenac Brown team continues to use the traditional soil maintenance techniques, which gradually enhance the structural, chemical and biological properties of the earth. A perfect match between Men and Nature..." Over 400 000 vinestocks are managed every year. Pruning, removal of buds, leaves and secondary shoots, hand harvest ..., several times per year the whole team works vine by vine and checks each single cluster.Such a sharp selection does not replace the environment. The finest wines are given by the Nature.

Decanter 95 “Poised and precise, this is excellent quality with well-defined black fruits. It feels like the fruit is ripe but not overly so, carefully delineated

49% Merlot, 40% Cabernet Sauvignon, 11% Cabernet Franc From the frist rainy days of mid-September, the grapes are gleaming, the ripening is accelerating, and the sun

Wine Enthusiast 94 "The impressive Victorian baronial chateau of Cantenac Brown is one of the landmarks of Margaux. The wine is getting better each vintage. This

Neal Martin 95 "Tasted blind at the Southwold Bordeaux 2010 tasting. Wow - one of those wines that seemed to excel under blind conditions, this is

Wine Spectator 92 "This is perfumy and very pure, with lovely lilac and blackberry aromas followed by plum, cassis and black cherry fruit. The supple finish

Robert Parker 90-92 "For producing the finest Cantenac-Brown I have ever tasted, kudos go to the new administration and proprietor. This property has always produced a

Wine Spectator 87 "Blackberry and light mineral follow through to a medium body, with fine tannins and a caressing finish. Best after 2010. 11,665 cases made."