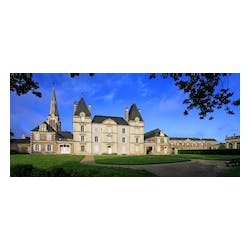 One of the oldest and most celebrated domaines in Savennières, Chateau d'Épiré is rich in history, not only for its fabulous architectural rendition of the Petit Trianon of Versailles, but most especially for its exquisite wines. Savennières is situated just southwest of Angers, on the north bank of the Loire River. Vines have been cultivated there since the time of the Romans. The Plantagenet dynasty allowed for the first exports of the wine to be sent to Great Britian in the 11th century. The domaine itself has been in the Bizard family continuously since the 17th century. The most recent owners and caretakers of the land are Monsieur and Madame Luc Bizard. They own eleven hectares, nine of which are entirely dedicated to the cultivation of Pineau de la Loire, known today as Chenin Blanc. The château is exquisite, but the pièce de résistance is their winery, formerly a Romanesque chapel, which is from the 12th century. Truly a blessed wine!

Wine & Spirits 90 "Layered and schisty, this wines dark, earthy tone points to the complex beauty it may achieve with age. The fruit is

Only a handful of producers we work with have been with Kermit since the 1970s, and Epir is one of those chosen few. Through thick

Chateau d’Epiré is an 11 hectare estate and this bottling is sourced from 30-55 year old vines in schist soils. From importer Kermit Lynch: "Despite

This wine is characterized by concentrated aromas of fruit balanced with an interesting minerality, which is typical of the region. This wine is accessible and

One of the oldest and most celebrated domaines in Savennieres, Chateau d'Epire is rich in history, not only for its fabulous architectural rendition of the

" Leave it to legendary importer Kermit Lynch to find an outstanding Savennieres that doesn't break the bank. Recently dubbed best value in the NY

" Leave it to legendary importer Kermit Lynch to find an outstanding Savennieres that doesn't break the bank. Recently dubbed best value in the NY

"This vintage was produced on a plot situated right above the Coulée de Serrant. It is made with traditional vinification methods, in old barrels, with

Wine Advocate 90 "Savennieres, a great appellation in the Loire, is not terribly well-known, but it produces stunningly dry whites from Chenin Blanc with a boatload

Wine Enthusiast 92 "A wine that combines the richness of the vintage with the extreme flinty texture of young, dry Chenin Blanc. Packed with ripe acidity,