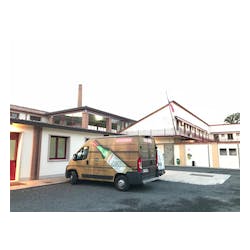 Dalmatia is a stretch of land and islands 600km long, on the eastern shores of the Adriatic sea. Zara was the Venetian capital of Dalmatia for 400 years, and when the Republic fell, first Napoleon's France and later Austria ruled the region. GIROLAMO LUXARDO, sent there as consular representative of the Kingdom of Sardinia, moved to Zara with his family in 1817. His wife Maria Canevari became especially interested in perfecting "ROSOLIO MARASCHINO", a liqueur produced in Dalmatia since medieval times and often made in convents. Girolamo founded his distillery in 1821 to make the liqueur and, after 8 years of research in perfecting it, he obtained an exclusive "Privilege" from the Emperor of Austria, a valuable and cherished acknowledgment of the superior quality of the Luxardo product. Today the firm proudly continues bearing the denomination of "PRIVILEGIATA FABBRICA MARASCHINO EXCELSIOR".

Wine Enthusiast 90-95 "The bouquet is lovely, balanced, properly astringent, ripe and juicy with scents of cherry stone and cherry juice. The palate entry is

"Triplum is a classic "triple sec" distilled by Luxardo, rigorously faithful to the original production specifications since the first half of the 19th century. The

"Luxardo Amaretto di Saschira is amazing. This wonderful nectar is flavored using only almonds (from Avola which is considered to be the best almonds in

" Intensely yellow in color with the pungent fragrance of newly gathered lemons. Well-rounded and harmonious, with a pleasant sensation of aromatic freshness on the

Luxardo Bitter Bianco shares the same infusions of bitter herbs, aromatic plants and citrus fruits with Luxardo Bitter. Before the blending process however, most of

" Colour: Clear.Perfume: typical of sambuca, has a very intense aroma.Taste: sharp but well balanced, very rounded, with the anise taste persisting in the mouth.

When Luxardo marasca cherries are harvested at the beginning of every summer, part of the juice is separated and left to mature until natural fermentation

"A pleasant aperitif liqueur obtained by the infusion of several herbs and fruits such as: sweet oranges, bitter oranges, rhubarb, mint, marjoram and thyme. Enjoy

" Grappa is a Northern Italian distilled spirit obtained from the "vinacce" or grape's stem. The grape stem is pressed lightly, kept fresh and distilled