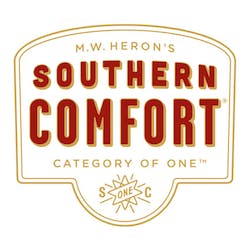 Southern Comfort was first produced by bartender Martin Wilkes Heron (1850–1920), the son of a boat-builder, in 1874 at McCauley's Tavern in the French Quarter of New Orleans, Louisiana.[3] According to the New Orleans Convention & Visitors Bureau, McCauley's Tavern was "just off Bourbon Street", and the original form of the drink was called Cuffs and Buttons.[2][7] Heron moved to Memphis, Tennessee in 1889, patented his creation, and began selling it in sealed bottles with the slogan "None Genuine But Mine"[7] and "Two per customer. No Gentleman would ask for more." Southern Comfort won the gold medal at the 1904 World's Fair in St. Louis, Missouri. In an episode of The Thirsty Traveler entitled "A River of Whiskey," spirits historian Chris Morris describes the original recipe of Southern Comfort. Heron began with good-quality bourbon and would add: "An inch of vanilla bean, about a quarter of a lemon, half of a cinnamon stick, four cloves, a few cherries, and an orange bit or two. He would let this soak for days. And right when he was ready to finish, he would add his sweetener: he liked to use honey." Since the 1930s, the image on the label of Southern Comfort has been A Home on the Mississippi, a rendering by Alfred Waud depicting Woodland Plantation, an antebellum mansion in West Pointe à la Hache, Louisiana. Woodland Plantation, which is listed on the National Register of Historic Places,