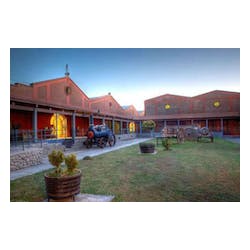 OVER 145 YEARS OF WINEMAKING TRADITION, PASSION AND INNOVATION IN SAN JUAN, ARGENTINA.The history of Graffigna is entwined in the history of Argentina and began when an Italian immigrant arrived in Argentina with the clear objective of discovering a new and unchartered wine terroir. The Winery was founded in 1870 by Santiago Graffigna in the province of San Juan. Santiago Graffigna was a true entrepreneur, an innovator and a risk-taker who gave everything in order to achieve his goals. In 2009, Graffigna was recognized as "Winery of the Year" in the USA by the Critics Challenge and Graffigna Centenario became the most awarded Malbec in 2007-2008. Moreover, in 2010 Graffigna Centenario & Grand Reserve Malbec wines received 90 Points by Robert Parker. The history of Graffigna is marked by the seal of the pioneering spirit and the innovation of its founder, Don Santiago Graffigna. It is a premium Argentine wine that transmits exceptional quality, intensity and above all, a passion for things that make for a unique wine experience. Graffigna is an invitation to discover and to explore; an adventure that begins with the uncorking and sharing of a single bottle.

"Graffigna Centenario Reserve Cabernet Sauvignon is ruby red with purple hues. It has a vivid nose of spices and blackberries along with toasted aromas from

"Elegance, jasmine bouquet and the appearance of peach and apricot. Very fresh, with a young palate, subtly fruity and floral. Harmonious and refined, with a