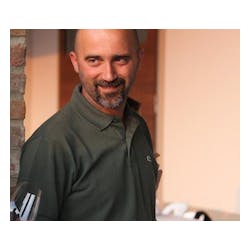 "One of Piedmont's superstars... these are wines of extraordinary complexity and breathtaking richness. The spectacular offerings from Pira 's vineyards in and around Serralunga d'Alba are among the more riveting examples." – Robert Parker Established in the early 1950s, the Luigi Pira estate encompasses 12ha of Nebbiolo, Dolcetto, and Barbera in the commune of Serralunga d'Alba. For many years, the family produced and sold their grapes, later producing and selling wine in bulk to local negociants. Only just a few years ago did the estate begin ageing and bottling its own wines. Luigi's son, Giampaolo, recently took the reins at the estate, overseeing the cellars while his brother, Romolo, and his father continue to maintain the vineyards. Pira's holdings are in the three most prestigious crus in the Serralunga commune: "Margheria," "Marenca," and "Rionda." The first Barolo was produced only as recently as 1993, but since then, the family has racked up accolades and high scores from the worldwide press. 50-55,000 bottles are produced each year. Vineyard Management: Integrated insect and disease control is followed. Only natural products are used in order to respect the environment: sulfur- and copper-based products are mainly used. No insecticides are used. Only organic fertilizers are used. Natural cover crops (grass cover) are left on the rows between the vines. In autumn the soil is tilled. Only absolutely necessary doses of SO2 to prevent oxidation are added to the wines. Farming Practice:Practicing Organic

Vinous Media 92 "The 2014 Barolo del Comune di Serralunga d'Alba is the only wine Giampaolo Pira made in 2014, and is a blend of all

Wine Spectator 94 "Notes of eucalyptus, juniper, cherry and fresh-cut grass are the highlights of this vibrant red. Steely, with a backbone of iron and a

Wine Spectator 93 "Dense and complex, with a saline edge to the cherry, licorice, tar and underbrush flavors. The tannins are dense, mouthcoating and dusty, yet

Wine Spectator 93 "Though lean and sinewy, there is a tight band of cherry, leather, iron and tobacco notes coursing through this red. Finds balance between

Wine Spectator 94 "Dense and compact, with a core of cherry and plum flavors shaded by tobacco, tar, mineral and spice accents. Fresh, leaving a layer

Vinous Media 90-91 "The 2011 Barolo del Comune di Serralunga is one of the best entry-level Barolos readers will find. One of the things I like

Robert Parker 90 "The 2010 Dolcetto d'Alba is a dazzling wine. Blackberries, blueberry jam, tar and crushed rocks are just some of the notes that emerge

Wine Spectator 93 "Leads off with white pepper and pine resin aromas, displaying cherry and plum notes as this red develops on the palate. Tightly

Robert Parker 95 "The 2007 Barolo Vigna Margheria, typically a powerhouse, shows an unusual level of finesse and elegance without losing its essential intensity and richness.

Wine Spectator 96 "The black currant, violet, black cherry and mineral aromas and flavors in this red are seductive. A rich and supple wine, though well-structured,

Robert Parker 94 "Marenca, far less known, is not one whit inferior to Vigna Rionda as a vineyard, and the 1999 Barolo Marenca is simply superlative.