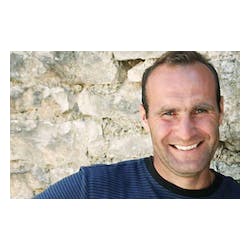 Pierre Yves Colin was the winemaker for his father's Domaine Marc Colin until 2005. He began his own domaine, first as a micro-négociant operation, focusing on tiny quantities of the finest wines that he can buy. Now he has grown his domaine with the help of family holdings to 70% plots that he owns and 30% grapes he purchases. His holdings are mostly in Chassagne-Montrachet (where the domaine is located) but he also produces multiple bottlings of Meursault, St. Aubin, and Puligny-Montrachet. Pierre-Yves has rapidly become a star in Cote de Beaune and is now considered one of the pre-eminent young producers of White Burgundy. His choice to use larger demi-muid barrels and eschew the use of battonnage, makes each one of his bottlings a clear expression of its terroir and a study in mineral-driven Chardonnay. Tasting in the Colin-Morey cellar (or anywhere you are lucky enough to have a bottle), is truly a special experience. With each vintage Pierre-Yves continues to prove his enormous talent and we look forward to drinking his years for many years to come!

Jancis Robinson 17 "Racked to tank early November, so he wasn’t going to show this or the Vieilles Vignes. 1.11 ha (2.74 acres) but they keep

Jancis Robinson 16.5 "New in 2017. Same grower as for their Corton-Charlemagne, who is about to retire. Calcareous slopes. Tank sample." Tasting Notes A touch of cedary spice.

Jancis Robinson 16.5 "1.5 ha (3.7 acres) across three parcels in this lieu-dit, the extension of Les Castets. Very calcareous. Planted to red for a long

Jancis Robinson 17 "Blend of three parcels (En Crot, Les Combes and Perrires in equal parts) that were not complex enough on their own. Named after

Decanter 94 "En Remilly still deserves its reputation as one of Burgundy's most underrated sites, even if prices have increased in recent years as wine lovers

The Wine Bright pale yellow. Rather Chassagne-like aromas of pear, menthol, white flowers and white pepper. Fatter than the Hommage à Marguerite but without quite the

Jancis Robinson 16.5 "350-litre barrels but not new. Bottled two days before this tasting (mid November). 'People are getting more interested in Aligoté', says Colin-Morey. 'Since

Jancis Robinson 16.5 "Four parcels in Meursault, plus 15 from both Puligny and Chassagne and 30 St-Aubin. Picked at different times, St-Aubin later. Very mineral in

The Wine Bright pale yellow. Rather Chassagne-like aromas of pear, menthol, white flowers and white pepper. Fatter than the Hommage à Marguerite but without quite the

The Wine Inviting yellow-green color. Fully ripe aromas of peach syrup, lemon drop and white pepper. Quite concentrated, thick and rich, with its flavors of grapefruit

The Wine The palate is well balanced with fine weight in the mouth, although that element of reduction persists, therefore I advise giving it two to

The Estate Pierre-Yves Colin is the eldest son of the famed Marc Colin. After working as the winemaker at his father’s domaine from 1994 to 2005,

The Wine La Comme's gentle slope gives it an excellent position to benefit from the morning sun, as vines are angled neatly toward the southeast. This