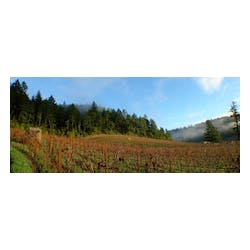 "One of California's (perhaps the world's) most flamboyant, talented, contrarian wine producers is Napa Valley's Jayson Woodbridge, the owner of Hundred Acre winery. Woodbridge has been running in high gear since his debut 2000. His 100% Cabernet Sauvignons are made primarily by him, with some consulting advice from Philippe Melka. His first effort was from his home vineyard, Kayli Morgan, which is situated east of St. Helena. That offering was followed by a Cabernet from the 15 acre Ark Vineyard on Howell Mountain. The most common characteristic among all of the Hundred Acre Cabernet Sauvignons is their incredibly opulent, creamy textures. That character vindicates Woodbridge's harvesting decisions as he seems to achieve extraordinarily sweet, noble tannins in all of his wines." -Wine Adocate, Robert Parker

WINEMAKER NOTES 2017 is very much like a combination of the magic qualities of the 2013 and 2016 vintages combined. Two incredible vintages almost fused into one

WINEMAKER NOTES Thee 2017 is very much like a combination of the magic qualities of the 2013 and 2016 vintages combined. Two incredible vintages almost fused into

Robert Parker 97 - 99 "The 2008 Cabernet Sauvignon Ark Vineyard, a larger site on Howell Mountain, possesses a dense ruby/purple color as well as an