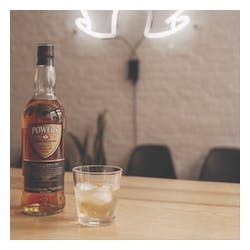 Back in 1791 our founding father James Power created a Single Pot Still Irish whiskey using only the center cut of the distillate. This style of whiskey is unique to Ireland, and is made from a mash of malted and unmalted barley. It is then triple distilled in traditional copper pot stills. But unlike any other Pot Still Irish whiskey, James Power went further. Every drop since James Power began his vision, has not only been triple distilled, but more top and tail gets thrown away than any other Irish whiskey. This means only the purest heart of the distillate remains.

"The Number One selling Irish whiskey in Ireland, Powers Irish Whiskey has become "the father of all Irish Whiskeys" through a tradition based on over

Whisky Advocate 92 WA TOP 20 2019 Rank 18 " The Powers Distillery in Dublin historically used the swallow to signify the age, quality, and purity of

" A single pot still incarnation of Powers whisky, named for the now-defunct old Powers distillery. This is a very classy whiskey made using a

Malt Advocate 91 "After being around for about a decade, it’s nice to see this whiskey finally being sold in the U.S. Soft, sweet, and silky