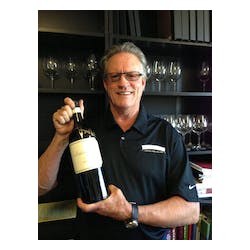 Pahlmeyer Wine released their first vintage in 1986 – they currently taste their wines at the upscale Maisonry tasting room in Yountville. They started producing wine at the Napa Wine Co in 1994 soon after Napa Wine Co underwent a huge renovation to accommodate production from wineries who do not actually have their own physical winery. This winery was started by Jayson Pahlmeyer a former attorney who once his wines started becoming popular, stopped his legal work and dedicated his full time to his wine. As with several other vintners we have meet with who worked in other industries before becoming vintners, Jayson started becoming hooked by the wine industry and slowly phased out his law practice. He made several trips to France to find some of the highest quality Bordeaux varietal clones and then took them back to California where he planted his own vineyard.

Wine Enthusiast 92 Thick red fruit becomes approachable on the palate in this stylish, focused and full-bodied wine from the coast. Big powerful waves of tannin

Jayson Red Wine displays deep ruby to garnet color in the glass. Aromas of cherry and blackberry compote, with just a hint of Jordan almonds,

James Suckling 93 A velvety and juicy wine with sweet-tobacco and blackcurrant character. Full and delicious. Drink now.. Jayson wines are born from two of the

Wine Advocate 95 The 2016 Chardonnay has a lovely savory, yeasty/toasty nose over a core of warm grapefruit, fresh apricots and allspice with a touch of

This wine has vibrant ruby color in the glass. Floral aromas mingle with notes of plum, black cherry, vanilla, forest floor, and granite. A juicy

Wine Enthusiast 94 This has an invitingly fragrant sweetness on the nose, with jasmine and cotton candy, while the palate is etched in generous helpings of

The 2016 Jayson Red Wine displays deep ruby to garnet color in the glass. Aromas of cherry and blackberry compote, with just a hint of

Wine Advocate 93-95 There are few truly profound Merlots being made in California, but Pahlmeyer has consistently made some of the best. I still have some

Deep ruby in color, this wine bursts with aromas of dark fruit and rose petals. Delicate blackberry and bing cherry flavors leap from the elegant

Jayson Red Wine is a distinctive blend of Bordeaux varieties from some of Napa Valley’s finest vineyards, crafted to express each vintage with intensity and

Connoisseurs Guide 91 By Pahlmeyer. Managing the difficult task of being fresh, ripe and lively at one and the same time, this carefully constructed youngster scores

James Suckling 97 Fantastic aromatics with blackberries, blackcurrants and iodine. Licorice, too. Medium to fulll body, fine and velvety tannins and a very polished and gorgeous

Wine Spectator 91 Firm and well-structured, with a pleasing burst of blackberry and wild berry, plum and black cherry notes, tilting into a fruit-bowl medley of

The Jayson Chardonnay shows Bright and brilliant with golden hues, this wine bursts with aromatics of honey, caramelized green apple and mandarin orange. Its rich

Wine Advocate 94 The 2014 Chardonnay is light gold-colored with a greenish hue and beautiful, fresh tropical fruit flavors of pineapple, pear, honeysuckle and a touch