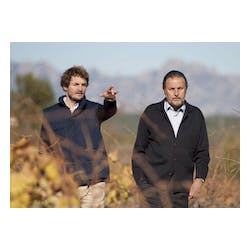 Wine production at Raventos i Blanc started in 1497 when the estate was founded in Sant Sadurni d'Anoia. This date has been authenticated by documents at the estate and recognized by the Spanish Government. The first Cava in Spain was produced here in 1872 by Josep Raventos Fatjo. The estate as it is now, was founded in 1984 by Josep-Maria Raventos, a member of the Codorníu family. He wished to create a small, quality-oriented winery that would stand apart from the large co-ops in the area. Today Raventos owns about 300 acres of vineyards planted mostly to local varieties such as Macabeo (Viura), Xarel-lo and Parellada. When we visited the estate in July, Pepe Raventos, Joesp-Maria's grandson described the philosophy of the winery to be "completely terrior driven". Pepe has moved forward with a geological and climactic survey of the entire property which has revealed 44 individual parcels which will be managed separately. Pepe worked with Didier Daganau in the Loire, Harold Hexamer in Nahe and Phillippe Blanc in Alsace before returning to his family's winery in the Penedes in 2001, giving him perspective and insight into his own estate. "We have great red wine from many regions. For sparkling wine we always think of Champagne; maybe the world would like to taste another interpretation". It is this sort of pioneering mentality, so focused on quality that has skyrocketed Raventos to the top of its category, served in 3 star Michelin restaurants like El Bulli and Arzak. The soils at the estate are unique; the sedimentary calcareous soils were deposited during the Miocene period when the area was under the sea. At different altitudes the soils change, but the "mother rock" is all deep sedimentary limestone. At the very highest point, limestone and chalk soils are exposed, and this parcel is planted to Pinot Noir sourced from the Margaine estate in the Montagne de Reims. As with all wines at the Raventos estate, The L'Hereu Reserva and the L'Hereu d'Nit Reserva Rosado are sourced entirely from estate grown fruit, all from a single vintage and aged for a minimum of 2 years. The oldest vineyard, the Clos del Serral planted slightly lower is dominated by Galera, a compact clay. The vines here are 80 years old and are bottled as a single parcel wine, Manuel Raventos Gran Reserva. The grapes are biodynamically farmed and certified by the Integrated Production Council (CCPI). Farming Practice:Certified Organic

Tasting Notes "An intriguing ros that conceals the soul of a white wine in its purity and transparence. A splash of Monastrell imparts a special complexity

The Wine 50% Xarel.lo, 40% Macabeo and 10% Parellada from the Vinya dels Fossils site. This zero-dosage sparkler undergoes primary fermentation in stainless steel and secondary

Tasting Notes "Pale, green-tinged yellow. Lively, mineral-accented citrus and orchard fruits and succulent flowers on the nose, along with fennel and ginger accents that build

Wine & Spirits Magazine 94 Pepe Ravents adds depth and a touch of color to this estate-grown sparkler with fruit from monastrell vines planted in 1974.

Vinous Media 92 "Pale, green-tinged yellow. Lively, mineral-accented citrus and orchard fruits and succulent flowers on the nose, along with fennel and ginger accents that build

Wine Advocate 92 "The very pale sparkling ros 2016 De Nit is a blend of Xarello, Macabeo, Parellada and around 5 Monastrellso, it's not a bleeding

Wine Advocate 91 "Pepe Raventós told me that 2016 is the surprise vintage and one of his favorite, when the vines produced tiny grapes after two

Wine Advocate 90 "The 2015 Blanc de Blancs, the wine that replaced the old L'Hereu, was produced with fruit from different organic and biodynamic plots within

Wine Advocate 91 "The 2014 Extrem is a pure Xarello with as little sulfur as possible. The original idea was to do it without any added

Wine Advocate 92 "The 2013 Silencis is pure Xarello from a cold vintage harvested on September 25, which is the date when Xarello used to be

Wine Advocate 91 "The 2013 De Nit is a blend of the three classical white grapes from the region, Macabeo, Xarello, Parellada and a pinch (5%)

Wine & Spirits 93 "Pepe Raventós farms his vineyards with biodynamic practices, blending this from macabeo (45%, the vines planted in 1999), xarel-lo (40%, the vines

Wine Advocate 90 "Talking about the wines, let’s start with the 2011 L'Hereu Brut, a blend of Macabeo, Xarello and Parellada from their own vineyards and

Wine Advocate 90 "The 2011 De Nit is a blend of Macabeo, Xarello, Parellada and Monastrell (only a small percentage, around 5%) partly from their

Wine Enthusiast 91 "There are few rosé Cavas out there that register this high on the quality meter. This elegant number opens with aromas of wood

Wine Enthusiast 88 "The stalky, yeasty aromas on this sparkler are typical for Cava. The mouthfeel is big and a touch flabby, with wheaty, stalky

Robert Parker 93 "The outstanding 2009 De Nit (rose) has an almost hypnotic, perfect pale hue that is worth the price alone! A blend of classic