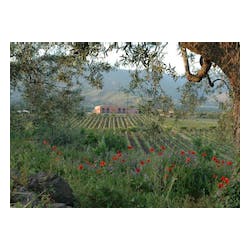 "Proprietor Marc de Grazia is one of the pioneers of the Etna. Not only was he among the first producers to recognize the value of these once-forgotten, ancient terroirs, he also was the first producer to bring attention to the specific qualities of these vineyards by bottling single-parcel Nerellos that have become reference-point wines for the Etna." – Wine Advocate "Terre Nere's wines all possessed unbelievable freshness and complexity as well as huge perfumes that suggested Pinot Noir...These wines are astonishingly complex and ethereal efforts from the hillsides of Mt. Etna in Sicily." – Robert Parker The Terre Nere estate has roughly 20-21 hectares, of which 15 are planted to vines. Roughly 4.5 of these have been uprooted and will be replanted within two years after letting the soil "rest". Two vineyards, for a total of roughly 11-12 hectares, make up the Calderara Cru, of which 1.5 hectares are pre-phylloxera; the rest are about 40-50 years old (and they have not been uprooted). Two different vineyards comprise the Guardiola Cru, for a total of 2.1 hectares, almost all of which is pre-phylloxera (except for some replanted vines). The Guardiola vineyards are the highest-altitude red-grape vineyards in Europe! The "Feudo di Mezzo" Cru is made up of two other vineyards, for a total of 1.35 hectares. 500,000 years of volcanic eruptions have created endless soil variation in neighboring plots of land, many of them radical. The soil at Terre Nere is mostly volcanic ash speckled by black pumice and peppered with abundant volcanic rock; to call it 'rocky' is putting it mildly! The weather variations in the area are profound and generally characterized by exposure, altitude, and 'airiness,' defined here as the character of a well-exposed vineyard not protected by hills, and therefore open to the cooling and drying effects of the wind. This is particularly important at Terre Nere because the harvest usually takes place in the last weeks of October, meaning that the grapes are in their most fragile state when the weather 'breaks' its autumn pattern, making them susceptible to oidium and mildew. The 'airiness' of the climate, however, helps to dry out the grapes after rain and moisture threaten mold. Above all else, the extraordinary elevation yields dramatic temperature variations between night and day, making the wines of Etna fine and elegant, devoid of the heat and overripe flavors that usually define southern wines. In fact, most people who have tasted these wines, particularly the 2004s, say they find them most akin to Burgundies or Barolos. Production is simple, classic, and Burgundian in style: the grapes are grown organically, using only bordelaise mixture and organic fertilization – mostly dung. Vinification follows the same lead: maceration-fermentation lasts 10-15 days, followed by malolactic fermentation and aging in oak – 25% new – and bottling around 18 months later. The 2004 vintage marks the real birth of Tenuta delle Terre Nere, because for the first time the estate is self sufficient, and the grapes produced were vinified at the estate's new cellars. The wines are astounding. The '02 and '03s have been likened to Pinot and Nebbiolo, as being Burgundian or Langhe-esque. Now there's no doubt about it. The old vines cuvees are difficult to distinguish from very fine Burgundy! With their subtlety and generosity, the wines manage to be rich and precise at the same time.

The Wine "At Terre Nere vinification is simple, classic, and Burgundian in technique. Alcoholic fermentation and maceration on the skins last from 10 to 15 days;

The Wine A favorite of Antonio Galloni, this delicious Nerello Mascalese-based rosato has been praised for its compelling aromatics and ethereal sweet fruit and extraordinary complexity.

The Wine 100 Carricante grown in volcanic ash soils speckled with black pumice and solid volcanic rock at an altitude of 600-650 meters above sea level.

The Wine 60 Carricante, 25 Catarratto, 10 Grecanico, 5 Minnella from vineyards located on the northern slopes of the Etna volcano at 600-900 meters above seal

James Suckling 94 " More dried-fruit character in this than in others from here; its a red driven by dried strawberries, frozen raspberries, cherry liqueur and

Wine Spectator 95 "A graceful, medium-bodied version, with silky tannins and a pleasing juiciness to the array of plumped cherry, stemmy herb and tangy mineral flavors,

The Wine The Etna Rosso San Lorenzo is from 4 hectares of vineyards in the same named district in the town of Randazzo. The vines are

Vinous Media 90 "Luminous medium-dark straw yellow. Aromas and flavors of chamomile and balsamic oils along with hints of pear and minerals on the inviting nose.

Vinous Media 93 "Luminous golden-tinged straw yellow. Minerals and a hint of white flowers on the saline accented nose. Rich round and smooth, with very deep,

James Suckling 92 "Aromas of cream, cooked apples and pears follow through to a full body, creamy texture and a bitter-lemon and lemon-curd aftertaste. Drink or

Decanter 96 "Perfect balance of freshness and richness. This 100% Carricante is perfumed yet austere, citrus yet saline, full yet energised. Fermented on lees. Organic.” Vinous Media

Vinous Media 91 "Pale onion-peel pink. Delicately fruity and floral aromas of jasmine, honyesuckle, redcurrant, gooseberry and minerals. Bright and crisp, this is a paragon of

Wine Spectator 94 "There's a lovely sweetness to the dried raspberry and strawberry fruit in this lithe, elegant, medium-bodied red, with supple tannins and juicy acidity

The Wine 60% Carricante, 25% Catarratto, 10% Grecanico, 5% Minnella from vineyards located on the northern slopes of the Etna volcano at 600-900 meters above seal

Wine Spectator 90 "A broad, medium-bodied white that expands on the palate with flavors of pear and peach skin, hazelnut and lemon parfait, while well-cut acidity