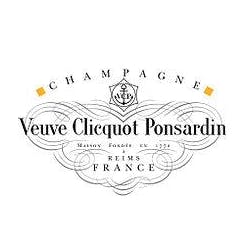 During the Napoleonic Wars, Madame Clicquot made strides in establishing her wine in royal courts throughout Europe, notably that of Imperial Russia, thus becoming the first Champagne house to ship Champagne through the blockade to Russia in 1811.[4] During this time, she also gave Champagne to the Prussian guards enforcing the blockade and the soldiers opened the champagne with their swords, so started the technique of sabring Champagne.[6] By the time she died in 1866 Veuve Clicquot had become both a substantial Champagne house and a respected brand. Easily recognised by its distinctive bright yellow labels, the wine holds a royal warrant from Queen Elizabeth II of the United Kingdom.

James Suckling 92 "The non-vintage edition of Veuve's rose’ Champagne has a bright-strawberry and raspberry-fruit thread on the nose with a gently spicy edge too. The

Wine Spectator 93 Pinot Noir dominates the blend (51%) and provides the structure that is so typically Clicquot, followed by Chardonnay (34%) that adds finesse and

Wine Spectator 95 An elegant Champagne, powered by a sculpted frame of acidity and minerality, this wears the refined, lacy mousse and well-meshed flavors of black

Its clear, brilliant, gold color lights up in the delicate tumult of fine bubbles produced by its persistent and remarkable effervescence. The nose is fresh,

Wine Spectator 94 "Very elegant, this is all in the details, offering precise and silky texture, mouthwatering acidity and a smoky, mineral undertow that enriches flavors

This has a brilliant and I paid robe, situated between copper and salmon. The first nose is already very expressive with fruity(strawberry,pink grapefruit,quince)and spicy notes(pepper, cinnamon

Wine Spectator 92 "There's plenty of finesse in this sleek Champagne, along with an airy texture and loads of grip. Graphite, lemon, toast and mineral aromas

Robert Parker 95 "I highly recommend the Veuve Clicquot 1990 La Grande Dame. It is exquisitely rich and accessible, yet bursting with potential."

Wine Spectator 93 "Striking in flavor and profile. A graceful, well-toned rosé, full of berry, autumn leaves and spice notes enmeshed in a rich texture, all

Wine Spectator 95 "If 1988 in Champagne is all about refinement, this is the evidence. Elegant, understated even, but well put together, with a silky texture

James Suckling 92 "The non-vintage edition of Veuve's ros Champagne has a bright-strawberry and raspberry-fruit thread on the nose with a gently spicy edge too. The

Decanter 94 Lemony richness on the nose, a struck match character that falls in with lemon vanilla note. Toffee apple allure on the palate with chalky