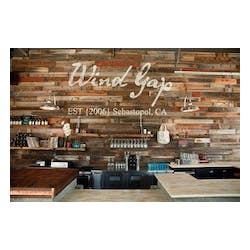 Wine lovers will know the name Pax Mahle from his first winery – PAX – which garnered high scores and much notoriety. Though he has always been influenced by French styles of winemaking, it was the bold, powerful Syrahs that first brought praise and attention to Pax in his new chapter as Sommelier-turned-Winemaker. Pax was sourcing fruit from a number of different vineyards within northern California. One year, a particular vineyard had an unusually cool growing season. Fermenting the fruit in single barrels, Pax found that the wines produced from this cooler site had the alluring freshness he had always loved in French wines. He believed they were the kind of wines one could drink every night with dinner, regardless of season. Pax continued experimenting with fruit from cooler growing regions and began picking at lower sugar levels, and in the mid-2000s created the Wind Gap label as an outlet for his new direction. According to Pax: "Wind Gap is all about classically styled wines that represent the new California." Many of the winery's vineyards are planted along or are directly influenced by one wind gap or another. These geological breaks in the coastal hills funnel wind inland and strongly influence the growing and ripening of grapes. It seems only fitting that the name should celebrate the forces of nature that are shaping Pax's wines. Farming Practice: Practicing Organic

Tasting Note: "Bright, fresh, and clean, with supple yellow & white tree fruits, pronounced floral aromatics, and exotic spices, this California Original is all about having

Vinous Media 93 "The 2014 Syrah Nellessen Vineyard is a much more typical wine for Wind Gap. A range of dark red cherry, plum, spice and

Vinous Media 91 "The 2014 Syrah (Sonoma Coast) is a bit more approachable and fruit-forward than I recall in the past. Sweet red cherry, plum and

Vinous Media 94 "The 2013 Pinot Noir (Sonoma Coast) is a great introduction to the Wind Gap wines. Exotic, perfumed and beautifully layered in the glass,

Vinous Media 93 "The 2012 Syrah Nellessen Vineyard captures the essence of this radiant, south-facing site in its rich, inviting personality. Here the flavors are bold,

Decanter 95 "Pax Mahle is one of California’s Syrah masters and this, from the Armagh, Nellessen and Majik vineyards, has a perfect balance of spice and

Vinous Media 94 "The 2012 Syrah Armagh Vineyard is the most explosive and mineral-driven of the Wind Gap Syrahs. Vivid and chiseled in the glass, the