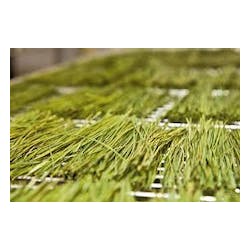 According to the label on the bottle, Polish nobility "seasoned" vodka with bison grass as early as the 14th century; this was likely a precursor to ?ubrówka. ?ubrówka has been manufactured in the region of the contemporary Polish-Belarusian (Polish-Lithuanian Commonwealth) border since the 16th century, and by 18th century was one of the favorite raw drinks of nobility (szlachta) and peasantry alike.In 1926 the Polmos company in Brze?? nad Bugiem (now Belalco company, Brest, Belarus) invented a method to mass-produce ?ubrówka, which was then copied by numerous companies worldwide, under a variety of brand names. The original distillery company in Brest (Belaco) still produces Brestskaya Zubrowka (????????, Zubro?ka), as do Lithuania (Stumbrin?), United States (Bison Vodka), Ukraine )Zubrivka), Germany (Grasovka and Blauer Bison), Russia (Zubrovka), the Czech Republic (Zubrovka), and many other countries. However, versions of the beverage produced outside of the Polmos Bia?ystok distillery in Poland are often considered "low-quality knockoffs" in comparison to the original brand.[1]Currently the brands "Zubrovka" and "?ubrówka" are registered by Sojuzplodoimport/Russia and the Polmos Bia?ystok company in Bia?ystok, Poland.[1] However, ?ubrówka is considered a generic name for a type of liquor by the U.S. Patent and Trademark Office, so anyone may use the name for products in the United States, and the name has been used by various companies there.[1]

"One of the most popular Polish vodkas on the market it, famously, contains a stem of bisongrass in each bottle. Soft on the palate and

"Distillers and chemists have been able to extract the essence from the Bison Grass, allowing vodka enthusiasts and cocktail aficionados to be captivated with this